A glimpse of gospel, jazz, and soul from the great legends is what inspires the sound of pianist Theron Brown’s music.  But the reason he plays is to encourage and influence people through his talents.

Born and raised in Zanesville, Ohio, Theron currently resides in Akron, Ohio, where he is an adjunct professor of Jazz Piano at Kent State University, and he is immensely involved in promoting jazz and classical music.  Theron is also the co-founder and director of the Rubber City Jazz & Blues Festival which takes place annually in Akron, Ohio’s downtown historic district.  You can see him regularly performing at many jazz clubs and theaters in northeast Ohio.

Theron received an amazing opportunity as he auditioned for and was cast as young Herbie Hancock in the 2016 released film about Miles Davis, Miles Ahead, directed by and starring Don Cheadle.

Theron is currently working on his debut album titled “Spirit Fruit”, which reflects on essential and fundamental characteristics that bring positive vibes to people’s lives.  This was inspired by Galatians 5:22-23.

Ronell Regis is a saxophonist, composer, arranger, and producer born in Brooklyn, New York City. It was in Brooklyn where he was exposed to immense diversity especially in the Caribbean realm through his Grenadian parents. He then moved to Atlanta, GA where he attended Tri-Cities High School which is where he found his love for jazz. While growing up in Atlanta, he began playing saxophone for his home church at 12 years old. He is now currently pursuing a degree in Jazz Studies at Kent State University. He has performed and studied with the likes of Theron Brown, Chris Coles, Bobby Selvaggio, Dave Morgan, Aidan Plank, Aaron Johnson, Tarik Rowland, and more. From growing up in the church to playing jazz, he aims to unveil his life experiences and feelings through music. 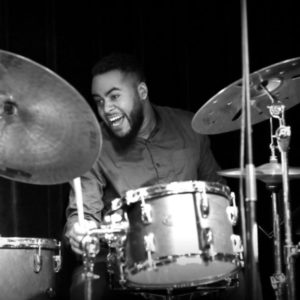 Zaire Darden began playing drums and percussion in his freshman year of high school. He starting off learning Cuban, Brazilian, and west African drumming traditions which led him to the drum set by his junior year.

Zaire spent most of his time competing in state, regional, and national big band competitions such as New Jersey high school jazz band competitions to the Berklee School of Music high school jazz festival in Boston, MA.  Zaire studied with Philadelphia’s Craig Mciver, who was taught by Philly Joe Jones and Max Roach. By his senior year, he continued to work with various artists and perform in Barack Obama’s Inauguration in 2009. 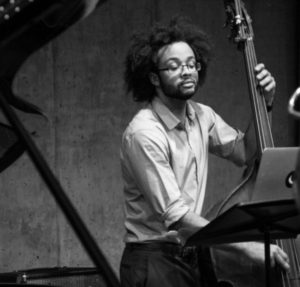 Jordan McBride picked up the bass at age 12 and began to develop a sound influenced by the Philadelphia Jazz scene. As a teen, Jordan studied with jazz greats such as bassist Andy McCloud and Mike Boon, often trailing the musicians into jazz clubs around Philadelphia. Jordan studied classical music earning a position in the Philadelphia Youth Orchestra, and studied jazz band performance and bass at Philadelphia’s prestigious Settlement Music School. There he joined a group of young jazz performers and began performing in and around Philadelphia. The group quickly gained a reputation that landed the young musicians gigs for Philadelphia Mayor, John Street, Philadelphia Eagle owner, Jeffrey Lurie, and a New York City performance for Freddie Hubbard’s memorial tribute, opening for jazz legend McCoy Tyner. Before entering college, Jordan had the opportunity to work with jazz legend Jimmy Heath. Jordan McBride holds an Artist Degree from Oberlin Conservatory of Music where he worked with Peter Dominquez and Gerald Cannon. Jordan is a creative arranger and composer, as well, based in Oberlin, Ohio. 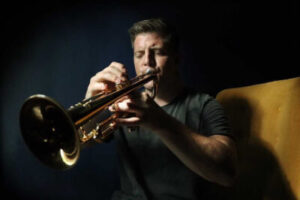 Trumpeter and Vocalist Tommy Lehman is a native of Akron, Ohio and a graduate of Firestone High School, Tri-C, and The Hartt School of Music. He has been playing professionally in Northeast Ohio for the past several years, regularly touring, recording, and/or performing with Acid Cats, Nathan-Paul and The Admirables, Alla Boara, Chris Coles’ Nine Lives Project, Alba Trio, Dan Wilson, Theron Brown, Bobby Selvaggio, and others.